Social media has reached a peak where it is accessible to all; you can create an account on all platforms and post anything you would like, in a click of a button. It creates an easy entry for potential bloggers to build their brand image or profile. 🤳

Uniqueness and originality is more difficult to attain since the blogging industry is doused and highly competitive. Content seems to be repetitive and monotonous. This is one of the reasons why bloggers don’t receive the engagement or comments they expect. 🤷‍♂️

We have been brought up in a world that teaches us to be fast. With technological advancements aiming to be faster and the Wi-Fi speed getting faster, we can’t help but move towards a fast-paced life. 🏃‍♀️ Even when it comes to social media, we see what we like, double-tap or bookmark and move on to the next post. According to a study by Dubai Press Media, most people in the MENA region spend most of their time on social media than on TV, news or search engines. Nevertheless, true thoughts of posts on social media aren’t shared through comments. 🙁

Another reason for the latter is because of the culture here. The Middle Eastern culture has inculcated a ‘speak only when necessary’ nature in the people brought up here. 🤫 There is a strong feeling of reservation by the community and they don’t feel the need to share their opinions on much.  A survey conducted by Northwestern University in Qatar on freedom of speech in Middle East has shown that the respondents (particularly in U.A.E and Qatar) don’t see the requirement of freedom of speech. 🤷‍♂️ It reflects on the engagement activity of bloggers. Sharing thoughts or opinions on social media, however, is not limited to just the culture here but also the stringent laws in the Middle East. The U.A.E Federal Law No.3 of 1987 causes strict action taken against those who denigrate the reputation of a person. The consequences could lead up to 2 years of imprisonment or a fine up to AED 20,000. 🤯

Privacy is a luxury in the social media sphere and it becomes more important with the rise of cyber awareness. The trend has shown that people prefer to use Direct Messaging or the ‘share’ option to convey their thoughts to their friends and family over commenting and tagging on the post itself. 😯 This is to probably establish a sense of confidentiality and limit the public from viewing their social activity.

The sphere of what might be considered “social media” is expanding, as people increasingly turn to instant and direct messaging services. 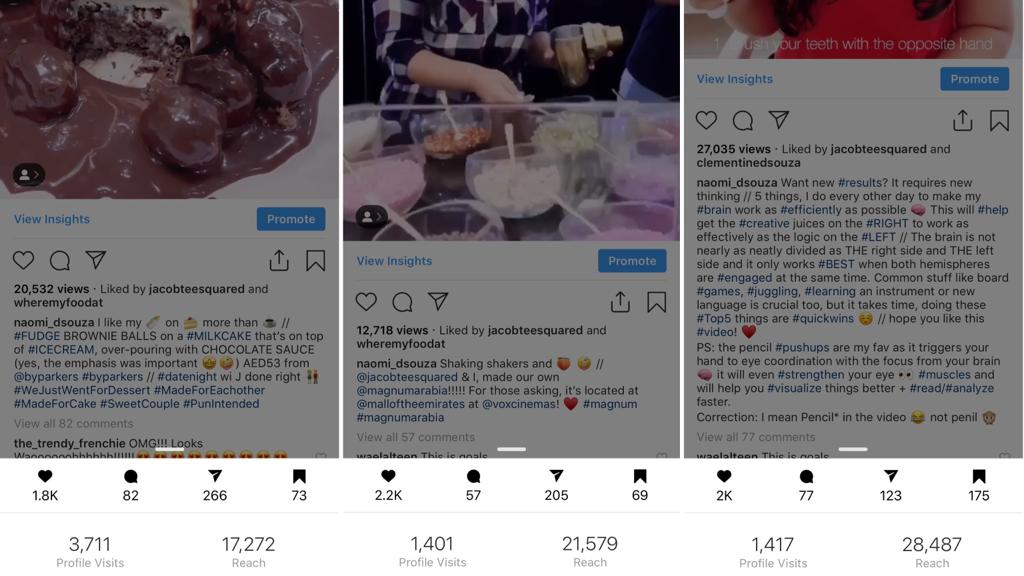 I would term the above screenshots engagement (from my Instagram @naomi_dsouza) as ‘Ghost Engagement’, something that only I can see and the public can’t. You will notice how the comments are minimal but shares and bookmarks are 100/200++. However, I foresee Instagram coming up with a feature, just like Facebook, where the number of shares would be shown beneath the image/video. Unfortunately, a bloggers worth, credibility, and engagement are calculated using their likes, followers AND comments, if it’s too low, we sometimes resort to comment pods, if we don’t have as many comments, the clients end up being unhappy… It’s like the saying, “What you see, is what you believe” (i.e. no comments, that means no engagement?).

To summarize, social media engagement is quite a tricky situation depending on the cultural environment, laws, privacy, and saturation of the blogging industry. 🤷‍♂️ That being said, appeal and attraction of content in the form of nostalgia, discoveries, and relatability is grapple that gets engagement no matter what but it might not be the best result one would expect. 😟

Written and Researched by Naomi D’Souza and Neha Shelly

5 vegan-friendly restaurants you must check out in #MyDubai

Smooth and Stress-Free Moving Tips That Work For...