What your belly button says about you?

Since I seem to have already developed some sort of an image as the intern with the weird article ideas, this might not come as a surprise to you. 😝 Ever since crop tops came in fashion, I started noticing people had belly buttons of different shapes and sizes. What is it about this half inch deep hole that makes it so mysterious? 🤔

My research started out with why some belly buttons were vertical and some horizontal, but very soon I started finding out some very weird things about them. If you think your belly button does nothing but sit and collect lint, think again! 😯 Also before we begin, full disclosure, Naomi LOVED this topic idea (just in case she calls me weird on her stories again 😂). Cool, let’s start!

During pregnancy, the umbilical cord supplies the baby with all the necessary nutrients and oxygen for it to stay alive. When the child is born, the umbilical cord is snipped off and all that remains is a tiny little stump. This stump later falls off, revealing a brand new belly button! Why the same process for every human on earth produces belly buttons of such different shapes and sizes, is still unclear. 🤷

Like I said, my research started with trying to find out why some belly buttons were vertical and some were horizontal. The obvious answer seems like, the flatter your stomach, the more your skin stretches, which in turn makes your belly button more ‘vertical’. But when I spoke to a friend about this, she told me that she had a vertical bellybutton even though her stomach wasn’t flat! 😳

This led me to a google search marathon about all things belly button. I also found out that, contrary to my belief, vertical belly buttons aren’t always sexy! 😱 Kendall Jenner, for eg., recently shocked everyone when she posted a picture of herself and fans noticed a very, very long belly button. Of course, she received a lot of backlash for it (haters, ugh), and people called her fake and weird and said they were freaked out. But Kendall took no notice of it and continued living like an absolute bawse. 😎

So what exactly is the ideal belly buttons shape? 🤔 University of Helsinki researcher Aki Sinkkonen says people tend to like belly buttons that are T-shaped or oval and vertical, with a little hooding. He also believes that they are a good indicator of how ‘fertile’ a woman is. “I suggest that the symmetry, shape, and position of umbilicus can be used to estimate the reproductive potential of fertile females, including risks of certain genetically and maternally inherited fetal anomalies,” he wrote in The FASEB Journal.

This one is a no-brainer. Most people prefer innies as opposed to outies. But did you know pregnancy can sometimes cause your belly button to change shape? 😦 “The expansion of the abdomen can cause some ‘innie’ belly buttons to pop out and become outies,” Dr. Karen Marie Jaffee, an obstetrician-gynecologist affiliated with University Hospitals of Cleveland, told Everyday Health. “But most often, there is not much change in the structure itself”. But relax, after giving birth the belly button usually changes back to its initial self. Usually.. 😰

While the vast majority of the population (almost 90%)  has innies, outies aren’t as rare as you think. John Stamos, Pamela Anderson, Katie Holmes, Kelly Ripa, Micheal Jackson and Micheal Kors (I urge you to not google this one) are all famous outie personalities! Why, even supermodels like Gisele Bündchen and Gigi Hadid (whose entire career basically depends on their body, by the way) have outies. 😲 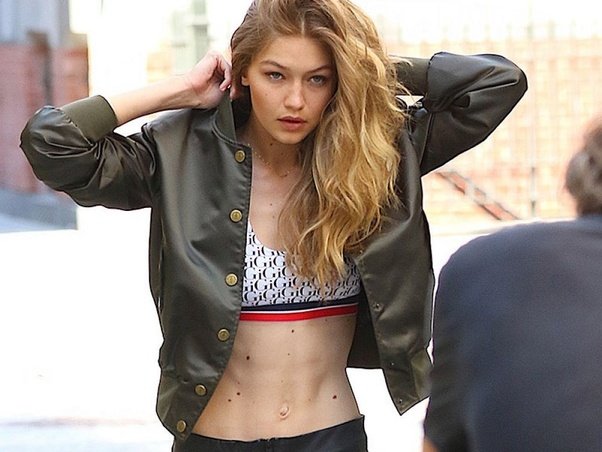 With all this talk of different kinds of belly buttons, I’d like to introduce you to supermodel Karolina Kurkova. All placental mammals have belly buttons because we were all connected to our mothers once via the umbilical cord..except for Karolina Kurkova. She has no belly button. 😳 You read that right. No innie, no outie, no deep one, no shallow one, nothing. Of course, she was born with one; but due to a surgery she had when she was a baby 👶, it reportedly had to get removed! Though a lot of her magazine spreads show her with the perfectly shaped navel, industry sources have revealed that it’s usually the after effect of a bit of photoshopping. But this hottie was a Victoria’s Secret Angel and was also voted as E! entertainment’s World’s Sexiest Woman, so I guess the lack of a belly button didn’t make a difference to her anyway! 🤷

In the loo and having a little trouble ‘getting it out’? 🤭 All you need to do is press the poop button! Make a fist and press gently but firmly on the area just below your navel for about 20 seconds. This is the acupressure point and gently applying force on it will stimulate your intestines. 15 minutes after pressing the poop button, you will most likely feel the urge. Be careful not to press too hard though, you don’t want to hurt yourself! 💩💩

SO WHAT DOES YOUR BELLY BUTTON SAY ABOUT YOU?

Omphalomancy, which is the study of belly buttons (yes, people actually study this), says that the shape of your navel can actually reveal a few things about your personality! 😯 Identify the shape first, and then read on to see what it really means.

A big belly button indicates good luck. You would have likely failed in your endeavors while you were young, but as you grow older, you become more successful, especially above the age of 40. You are wise, generous and great at management. 😎

Shallow navels are associated with negativity and weakness. 😔 These people procrastinate, often think they aren’t good enough, and hence tend to leave a lot of tasks incomplete. Cheer up, you’re better than that! Try to focus on the positive side of things. 🤗

These people are usually stubborn. They also love being the center of attention and are quick to trust people blindly (often being used by them). Put your guards up, and be wary of who you give your trust to. 🤔

You are quite cheerful and get along with people easily! You are quite lucky, and success comes easily to you. 😄

The opposite of the upward bellybutton, these people are are usually less energetic and tend to leave their tasks incomplete. 😭

These people are a little neurotic. They are over thinkers and worriers, and often miss out on good opportunities by think over it too much. 😣

If you have a wide belly button, you are likely vigilant and observant. You are strong-willed and quite suspicious of people. Loosen up a little, communicating more openly will bring you a lot of luck! 🙂

These are the romantics. 💑 They fall in love easily, and often. However, they aren’t always the healthiest, so take special care of that!

You are quite lucky in terms of finance, health and family matters. You lead a comfortable and stable life. 🤩

To sum it up, whether you have an innie or an outie, a vertical or a horizontal one, a shallow or a deep one, don’t despair. It doesn’t define you. 🤷 Belly buttons come in all shapes, sizes, and configurations and nobody is perfect. Except for Deepika Padukone of course. That woman is flawless. ❤

Written and researched by Zeba Bashir

5 Best Emirati Restaurants in #MyDubai, ranked by an Emirati

“I can’t workout today, I’m allergic to exercise” could actually be a valid excuse!

Planning Your Wedding During Covid-19