9 of the weirdest food etiquettes from around the world

Believe it or not, the way you eat can be offensive to people. 😳 What might be weird to one may be normal to the other, so it’s always a plus to be open to and appreciate different cultures and traditions. These etiquettes may not seem as relevant today, but as they say, when in Rome, do as the Romans do! 😎

In China, flipping a whole fish after eating one side is a big no-no. Why? Well, it is believed that it symbolizes fishing boats flipping over and capsizing. ⛵ In recent times, it is simply thought to bring on bad fortune. What you can do, is either remove the skeleton and continue eating the bottom half or use chopsticks to pull out the bottom half of the fish through the skeleton. I think I’ll just stick to fillets next time I’m in China! 🤭 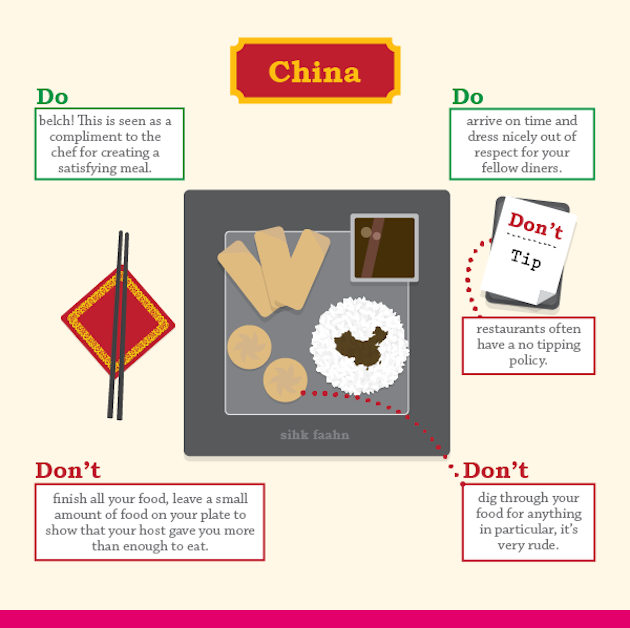 Most of us have grown up being taught to never leave a single morsel of food on our plates. But, in places such as the Philippines, polishing off your plate is considered rude, as it indicates that your host did not feed you enough. That does not mean, however, that you let half a plate of food go to waste. 🤷

Women of the Kagoro tribe of Nigeria are not allowed to use spoons whatsoever, as it is believed to be equal to communicating with the devil. It is also believed that this could lead to a revolt. 😱

Chopsticks are tricky utensils to use, and using or placing them incorrectly may be considered an ill omen. 🥢 Sticking your chopsticks upright into a bowl of rice is a way of making an offering to ghosts at funerals. Also, pointing at somebody directly while holding a pair of chopsticks is considered extremely rude. So maybe lay them down when you’re talking to somebody, and make sure it’s not directly pointing at anybody on the table! 🤔

While slurping is generally considered to be impolite, the Japanese consider it to be a way of saying that you thoroughly enjoyed your meal. Besides, we all know a bowl of piping hot ramen just tastes a lot better when we slurp our way through it! 🍜🤤

6. Don’t fork with your food

In Thailand, it is considered inelegant to use a fork to pierce your food and eat with. Instead, it is simply used to cut through food and push it onto your spoon, which you then place in your mouth. 😯

Don’t worry. In Tanzania, punctuality is the last thing your hosts expect from you. ⏲ Thus, it is always best to show up 15-30 minutes later than invited and never any earlier. BRB, planning my move to Tanzania (since I’m always late in putting out food to my guests anyway! 🤣)

While dining amongst the Portuguese, never ask for salt and pepper. This is seen as an insult to the chef’s cooking skills, as they season the food according to how they think is best. 🙅

In Kazakhstan, people customarily serve tea and bread to all their guests, irrespective of whether they are hosting them for a meal or not. ☕ However, expect your cup of tea to be filled only about halfway. Kazakhs believe that serving a full cup of tea is an indication that the hosts want you to leave. 😳

Written and Researched by Samreen Kazia.

3 free menstrual/period apps that should be your best friend, here’s why!

Types of Cosmetic Surgeries that can Redefine your...

Does the moon affect human behaviour?