The 7 Most Haunted Places in the UAE

Spooks and terrors are great ways to entertain people. But with the lack of genuinely scary movies, the only way to get a good scare with an additional burst of adrenaline is to visit places that are actually haunted.

Well, you don’t have to break the bank to travel to the places on this list; they’re all here in the UAE! Here are the top 7 most haunted places in the UAE:

Located to the south of Ras Al Khaimah, it is a place widely known locally to be haunted by ‘jinn’s’. Originally inhabited by 3 tribes, what stands now is just a hollow shell of what it used to be. Known as the ‘Red Island’ for the sand it is built on, Al Hamra shows us how scared we all truly are, especially in the night!

Have you ever been scared of the thought of children and horror movies? Well, if you do that’s one thing you and I have in common. Maybe that’s why the thought of visiting this palace, also located in Ras Al Khaimah terrifies me since its known that one can see the faces of children standing, staring at you at the windows of this palace not to mention the fact that the furniture has mysteriously gone ‘missing’ ever since it was abandoned more than 20 years ago.

This is an especially spooky place because of the ambiance it gives off to those in this tunnel. People have reported feeling as though someone was standing right beside them when no one was really around when passing through the tunnel. Not to mention, the neighboring building on the same road is built right in front of an old cemetery and just adds to the overall creepiness.

This tunnel leads to the airport road in the United Arab Emirates. 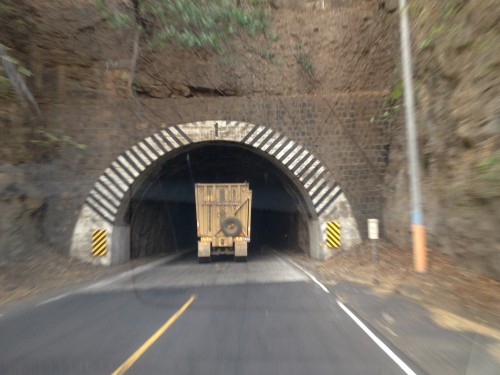 Located deep in the heart of Jumeirah 1, this seven-bedroom hotspot of paranormal activity is home to a group of Filipinos who claim to have experienced visitations for over a year now. Most unusual, perhaps, is Lora’s encounters with a male “spirit”.

Lora’s spooky story began in November 2011 when she was awakened at 3am. “I felt an intense pressure all over my body, as though there was a person sleeping on top of me. I tried to sit up, but couldn’t move anything besides my fingers and toes. On the curtains I could see a dark shadow atop me,” she says.

The Building-4 housing in Jumeirah, which was owned by Filipinos, is known to have literally driven its residents out of it. Witnesses’ have reported hearing the groans of a man, the cries of a baby and whole other load of paranormal activities, enough to make locals scared of even passing by, claiming that souls can easily be possessed there.

Legend has it that Jumeirah was once a graveyard, approximately 100 years ago, connecting trade route to Iraq, and now in modern Dubai, spirit(s) from the past linger on. [source]

A sales manager Namit Vyas, stooped by the Interchange 9 on Sharjah’s Al Dhaid Road to click a picture of his wife and daughter. But when he viewed the picture, he was shocked to no end. The picture revealed a shadowy, ghost-like figure with outstretched arms standing just next to his wife and daughter. The picture, once posted immediately went viral, and while a few were scared to no end, others were skeptical and questioned its authenticity, indicating that the picture was probably photoshopped. But to their amazement, photography experts confirmed that the ‘unknown’ being in the image was not photoshopped. Building number 33 in Al Khail Gate, Dubai, might present one of the latest ghostly activity from UAE as this building was only completed in early 2011 and its first tenants were three unfortunate workers of a food chain.

The residents of this building vacated out of it in just 6 days after they started noticing things like cellphones, combs, etc started disappearing every night and were founded at other tenants place!! After that fiasco, no one has dared to move in ever since. Witnesses have reported moans and cries, and locals believe activity is extremely rampant at night, so beware folks, or you may be possessed by these ‘spirits’! 21 Dubai Restaurants that will combat yo’ late-night cravings!

Should You Move Away Or Stay Local?

4 Effective Ways to Deal With Anxiety

Wow! I’m surprised that there are so many haunted places in the UAE that are close to residential areas. I mean deserted locations like Al Jazirah Al Hamra make sense because they’ve been abandoned for so long and Jinns are known to occupy empty locations, but the fact that there is an actual Filipino family living in the Jumeirah 1 villa despite the incidents that have occurred is just crazy! I would go running for the hills after the first encounter! Have you actually seen and/or visited any of these places?

Haven’t visited any, but Jumeirah 1 ofc, I’ve proly driven passed that area a 100 times but never realised it was haunted 😐

Also, have you ever had a ghostly encounter? I just love hearing stories like those

Hahha I’m glad I’ve never experienced anything, I’d proly SH** myself!! Have you?!

I have had an encounter on jabel jais

Are these places accessible to the public? I often go on organised ghost hunts back in the UK would love to do similar here

Yup they are accessible.

Where exactly is this Pan Emirates Tunnel ?? I have never seen such a tunnel or couldn’t find it in any maps.!!

Check this link out https://answers.yahoo.com/question/index?qid=20150706170015AA4IiGn&guccounter=1&guce_referrer=aHR0cHM6Ly93d3cuZ29vZ2xlLmNvbS8&guce_referrer_sig=AQAAALZiPy2HYNnqDyP50EP0F29KloAr5_AA0bVMxC2UXVd2jGS5fwyvRGClJdbb3ecSCz3_0eJqy8uXfda-567yKHmG4oK1HtGIUCpsLUzsn1s4tzaMPOPkVkQaYXPxTXZWTiXD_cWX3-W3lBddJXwYJPWAJTsRCC5md-XiGgBwlLGi

Jumeirah 1 and 2? where exactly? Can you spot it on the maps for me please. I need to just visit this.

Hi Zain, Jumeirah 1 & Jumeirah 2 are areas in Dubai, can’t exactly send you a link for the same. If you need specifics on those locations, I haven’t been there. This listicle was curated based on research with examples. I would never have the courage to go to these places thus don’t have specifics or coordinates of the areas ghosts or spirits reside. If you do, let me know x

Hi syeda .This is true that there are jin in the world .Actually they have population 10 times than the human.if we are 8 billion people on earth the are 80 billion.Actually our eyes and vision has limitation and we can’t see beyond our vision.I am scientist and I have developed some inventions.i did experiments and develop to capture speed of light and once you have these type of equipment you can observe a lot.
Like human there are good and bad jins in the world.
Now we come to the places as desoza has mentioned in UAE that are true . If you people have more interest to know about details I have lot to share .

Yes, I was in a tunnel in the Pan Emirates. A very scary place, if you ask me. Although the tunnel is small, I thought it was infinite