Note: You can choose any clinic for an intolerance test or opt for any dietician acc to your comfort levels. Below are what I chose from my personal research. The red, yellow, and green are a traffic light color coding system. The numbers are the antibody levels in your body that are detected by the blood test. The higher the value, the stronger your body’s immune response to that particular food. Elevated results are over 30 U/ml, in red borderline is 24-29 U/ml, and anything under 23 U/ml is considered normal. Mitun has seen clients with numbers going over 160 and even 180 U/ml!

How does a Food Intolerance work?

Food extracts are ‘printed’ onto nitrocellulose pads on a glass microscope slide, together with calibration standards and controls. A blood sample provided by the patient is diluted and dispensed onto each printed microarray. Food IgG antibodies, if present, bind to the food extracts. The bound food IgG antibodies are subsequently detected through the use of other immunoassay reagents which generate a blue color in the presence of the food IgG antibodies. The density of this blue color is measured using a high-resolution scanner. 🔬
The results generated by the scanner are then calibrated against the standards using the FoodPrint® reporting software to give quantitative results. This software then produces a tailor-made printout of the final food IgG antibody result for each food on the requested food panel. 😯

Ever since I realized my lifestyle (aka attending events, eating from outside every other day and managing my website simultaneously resulted in me not having time to work out) was getting out of hand, I decided to reduce tastings and delegate more of that to my team. Due to work, I’d travel every day to Abu Dhabi back and forth for months too and would have to manage my baby (aka blog 💖) on the side. Anyway… to become the healthier Naomi, I started consuming more of my fav proteins/healthy snacks to keep me full (i.e. egg whites, lentils, almonds, milk, rice, and sandwiches too every other day). 🍚🥛🥙

Diets and workouts stopped working on me, I felt bloated that would result in pain to an extent I’d feel I was heavy even while walking. My ankles as well weren’t visible after a week. 😩

(Intro to Hala: My amazing colleague who’s a nutrition junkie + gets a high with just the word ‘pilates’ or ‘coconut milk’ LOL)

I discussed my issues with Hala and she told me I’m not fat, I’m bloated and have tons of water retention (well that made me happy as I didn’t want to be super unhealthy that lead to me putting on weight right?). She recommended I get an intolerance test done asap as it was getting out of hand. That’s when I came across CosmeSurge and I got my test done by them. 👍

I found out that most of the things I was consuming, to be healthy, I’m actually intolerant to it… #FML

After I studied my report I was like JHDHSVDIXJD!!!! OMG, I’m intolerant to THIS, this, THIS and THAT?! What do I even eat now? Living your life a certain way for 24 years and then saying stop eating all of that, trust me… ouch lol. 😭

That’s when I decided I’d start with a meal plan. I researched quite a bit. Few were either too expensive or had boring food.. Color my plate and Simply Healthy Diets were my final 2 options. I eventually concluded on Simply Healthy Diets by Mitun De Sarkar for the below reasons,

Please note: the FoodPrint® IgG antibody test does NOT test for classical allergies, which involve the production of IgE antibodies and cause rapid-onset of symptoms such as rashes, swelling, violent sickness, difficulty breathing and anaphylactic shock. If you have a food allergy, it is important to continue avoiding that food, regardless of the test results obtained. This advice also applies if you have been diagnosed with Coeliac disease or any other food-related condition such as lactose intolerance.

Here’s my honest update to you… after over 2 months.

My first week of the diet was C R A Z Y 😢 I actually felt I was going crazy cuz for 24 years of my life I was never “restricted” when it came to eating 😐 As much as I agree I aggravated my intolerance, I also felt it was unfair for me to not touch gluten or dairy AT ALL. I never realized how much gluten and dairy I was eating until I started the diet, additionally, I never knew how much gluten or dairy was present in almost every delicious meal 🙄

Did I cheat at all in those 2 months?

I did not, except the last week when I had a tasting and they brought out a Sticky Toffee Pudding 😶 I personally felt I had ENOUGH, and I just HAD to indulge. When it came to my other tastings, I was trying to be super optimistic about my diet and told myself “YAY Naomi you’re going to explore ‘the other side of F&B in Dubai’”. I convinced myself that I can now see how many options are there for people who are Gluten Free AND Dairy Free (GF/DF), and if they’re actually good. My conclusion was – definitely not too many options, but there are options. Just do a quick google search and there will be tons of recommendations for ya! 😀 Considering I’m a blogger, I’ve tried a VARIETY of delicious food, thus, I did not feel the GF/DF offering were oh-so-amazing, but they sure were great. The best restaurant I visited was Mint leaf of London. Not once did I have a FOMO moment (#FearOfMissingOut) 🤤

Whenever I had a sudden craving (especially when I was stressed), I was literally surviving on these sweets the whole course of my diet.

How many kgs did I lose and what were the mistakes I made throughout my diet?

This wouldn’t be considered as cheating, but defo a mistake… I did end up having dairy once or twice in my coffee since the Barista forgot to replace cows milk with coconut milk instead 😭 (before someone suggests… I DON’T like almond milk with my coffee and soya is not good for you) and once when I bought normal salted potato chips, I realized after I finished eating it that it had yeast. I only came to know later as I had a severe tummy ache!! 😩

I lost about 3kgs but felt like I lost 6kgs. I made many mistakes and I know I could have lost a lot more had I not done those mistakes. The below are my observations,

Mitun is a gem, she isn’t a pushy ‘nutritionist’. She will understand your lifestyle and accordingly advise what you must do. Not once has she pushed me out of my comfort zone and ordered me on what I should do, but she did advice whenever needed.

Every week SHD would email me an amazing menu where I could choose what I wanted to eat for the following week (see screenshot below). Although they have a variety of different cuisines, a majority of the dishes are usually Indian cuisine as that’s what their clientele is, what they demand and prefer. I love trying out a variety of cuisines, but I do love my Indian food! ❤❤ If there are specific things you don’t like or would like to alter, Mitun does take that into consideration and will let you know if it’s do-able. If you end up choosing something that you’re actually intolerant too, she’ll not send that over (she prefers having your intolerance report beforehand though). 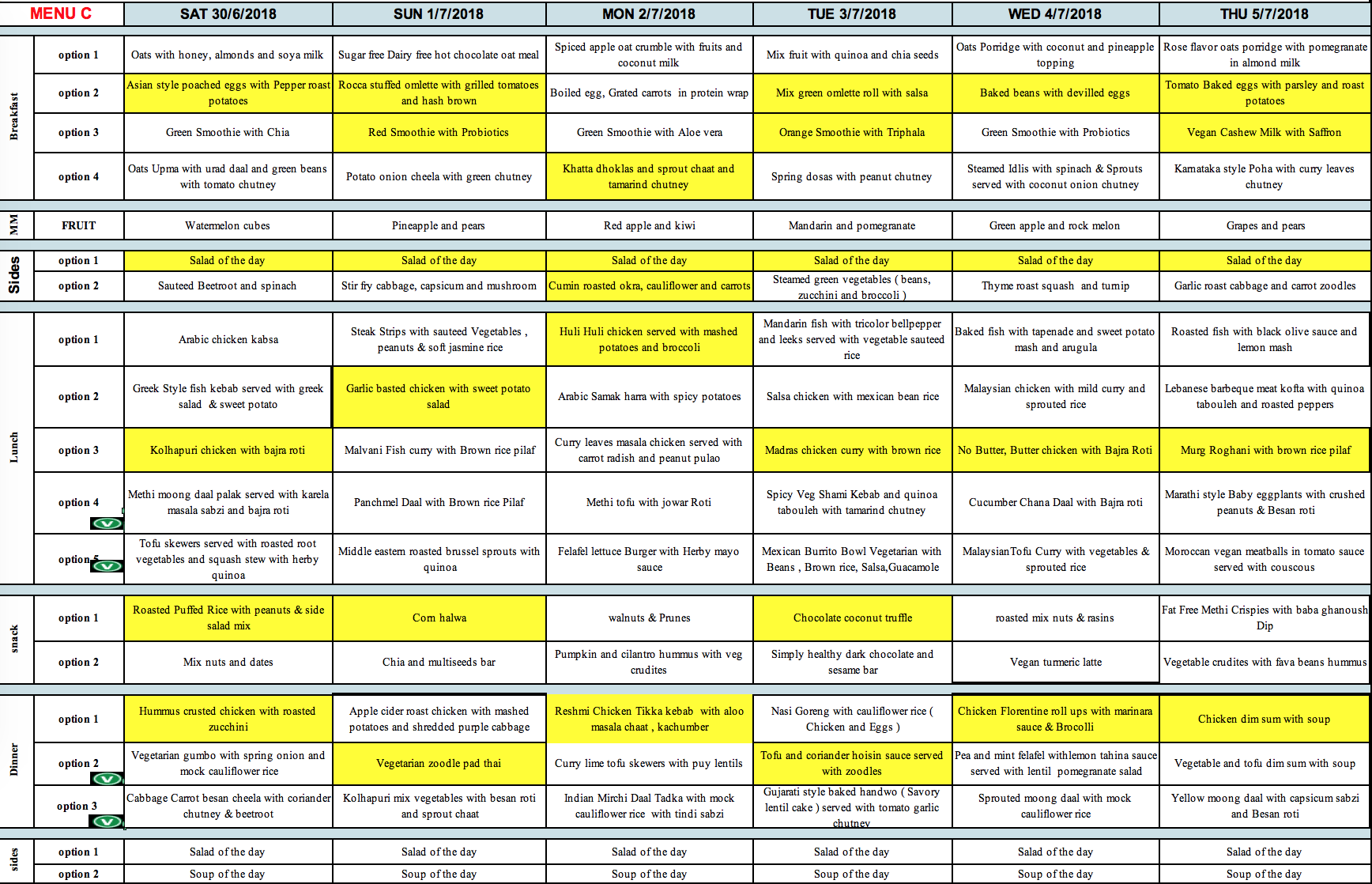 The yellows are what I opted for the week

SHD’s food is REALLY good 😍 Many dishes I opt for, are spicy too, just how I like it. They have everything from Dhoklas, biryanis to even daal makhani! To be honest Y’all, this was luxury for me and was a big deal since I didn’t even know these dishes could be GF or DF! 🤑😲 The variety is simply phenomenal and I can see how much hard work was put into developing these recipes. If it wasn’t for SHD I don’t think I could do this diet successfully as my cravings would’ve shot up the roof.

What was in your Simply healthy bag today ? @simplyhealthydiets @mitunds .We customize the diet plan for you , get you to choose your meals from the menu that’s best suited for you, your medical and lifestyle. So convenient and delicious . Losing weight was never this delicious and easy. #behealthy #befit #eatwell #eatclean #cuisine #healthyeating #mealdelivery #staymotivated #weightloss #lifestylechange #dietitian #savetime #nogroceryshopping #mydubai #mealdeliveryservice #mealsonwheels #customizedmealplan

The disadvantage: Sometimes the desserts for the week are great, sometimes, not-so-much. At this point in time, I used to survive on healthy desserts or my sister Jade used to make some for me (click here to know the desserts I had or find the recipes). Additionally, at times, you may choose a dish that sounds good but it may not suit your palate. Out of the 2 months I’ve been with SHD, this has happened to me just twice, so it’s not a do or die situation! 🤗

PS: I personally felt SHD isn’t just for people on a diet, or have intolerances. Her food is legit home-made, thus, if you don’t know how to cook, miss your mom’s food or if you love Indian food, SHD would suffice 🤩

Diet over. Now what?

I was intolerant to kidney beans, black peas, white peas, and everything in that family since I was a kid (for over 20 years) 😢😢 My mom then recommended I start homeopathy. I never believed in it but hopped onto that bandwagon regardless 5 years ago. I used to think what and how can 3-5 tiny sugar balls change your entire immune system and an issue you were born with?! 🤯 I religiously followed the treatment, had those tiny pills every single day and in 4 months, I was HEALED… COMPLETELY! The amount of “Rajma Chaawal” I had after was insane! 🤣🤣

As soon as I got done with my diet I wanted to restart my homeopathic medication. I kinda thought I was doomed and there was no way I’d be healed as being tolerant to Dairy and Gluten again is not a piece of cake (hahahha #punintended). I’ve been on it the past month and I’ve seen major improvements! 😎 The way my body reacts to the same has significantly improved.

I’m also restarting my meal plan with Simply Healthy Diets and this time, I’m not going to repeat the mistakes I did before. I’ve also noticed I’m more conscious about what I eat now and I’ve found myself flipping many items to see if they have ingredients I’m intolerant to. I’ve started going swimming every 2 days now and I can feel my pants becoming looser, body getting more toned and my metabolism has increased.

More updates coming soon as I have any!

How to make money by betting on losing weight?!

7 Perfume hacks to get the most out...

Planning Your Wedding During Covid-19

Which homeopathy can we visit? Suggest plz

Hi Anshu, I went to Dr.Batras 🙂

How many total kgs you lost in 2 months ?

Hi Muna, everyone’s body is different. I’m not sure how that would’ve worked for me. I did try getting rid of the intolerances and yes I did lose some weight as I basically cut out gluten and dairy. Homeopathy only helped me with my rajma intolerance.